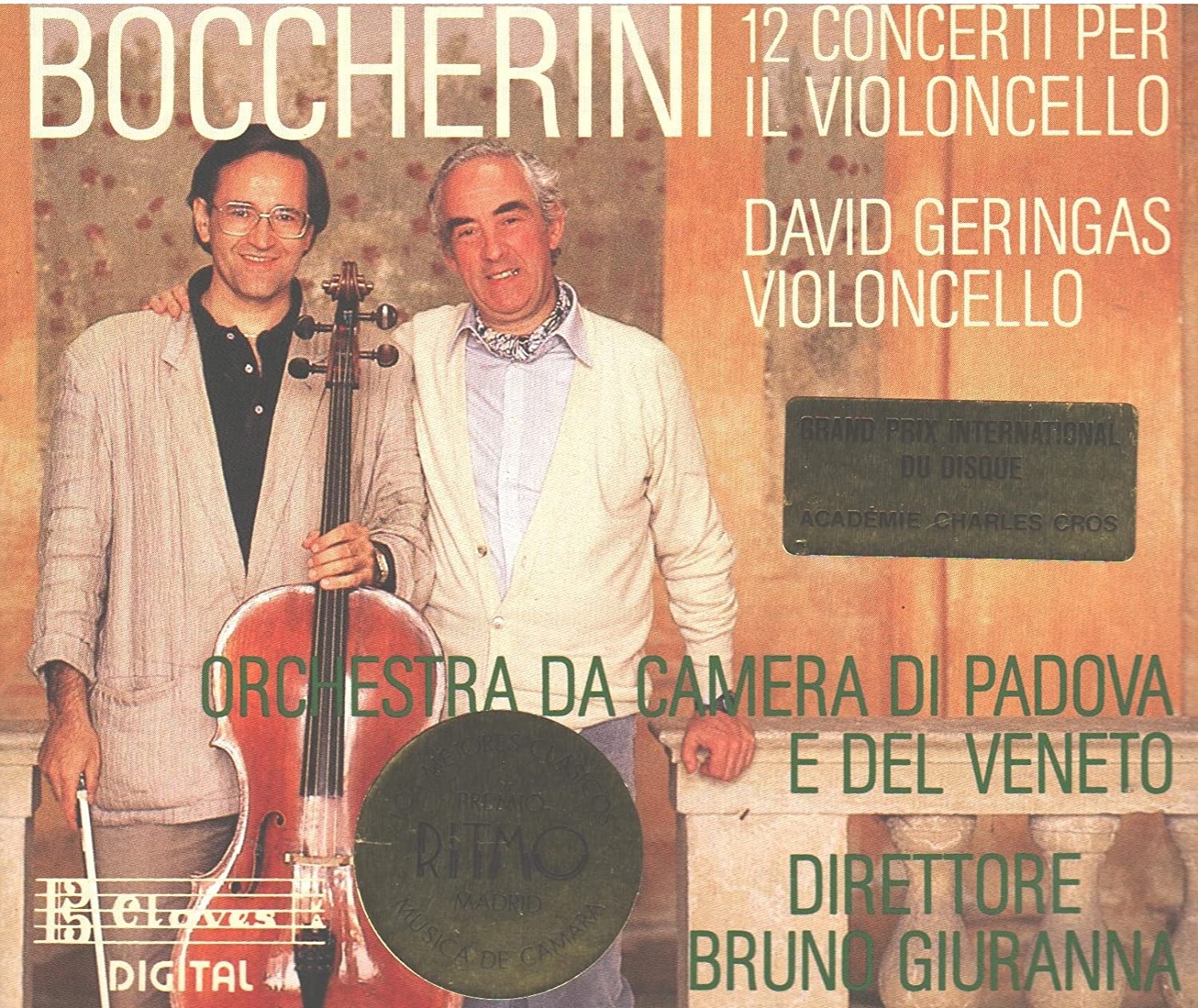 If I know you, you’ve already looked at the bottom to see how many Ludwigs this one gets, and you’re probably startled to see a three CD set by some people you’ve hardly ever heard of designated a must-have. But, that’s Boccherini! Of course you’ve heard ‘The Boccherini Cello Concerto’ as arranged by Friedrich Grützmacher from G 481 and 482, and published in 1895 (track 3/1). Every famous cellist has recorded it. Well, that one sounds better here in its original form than you’ve ever heard it, and there are eleven more equally delectable to go with it (track 1/10, 3/5). Get ready to be overwhelmed.
The performers are not exactly household names, but their credentials are stupendous. Conductor Bruno Giuranna was a co-founder of I Musici and played viola and viola d’amore solo with them during their many tours. This would account for the „I Musici sound“ of this recording. Lithuanian cellist Geringas studied with Rostropovich at the Moscow Conservatory and won the Gold Medal at the 1970 Tchaikovsky competition. He plays with a slightly ‘white’ sound in the upper register which is appropriate and authentic for this repertoire.

Boccherini was probably the greatest and most popular cello virtuoso of his time and was in great demand. Like Domenico Scarlatti, he settled in Spain; his guitar quintets are also among his finest compositions. Unaccountably his music was almost completely forgotten after his death and his compositions have until recently been sought after and treasured only by connoisseurs. These concerti are all in three movements and are accompanied by string orchestra with occasional horns and winds added. Besides a variety of orchestral sounds, the concerti display a variety of moods from a slightly Vivaldian late baroque style through the Rococo, Classic, to early Romantic styles. I have to find something to complain about, so I’ll say I’d have preferred a very slightly closer sound with a little more bass (a „Solisti di Zagreb sound“). The soloist, however, is just as closely recorded as anyone could want, and his technique easily stands up to the revelation. His rapport with the orchestra is flawless.

I suppose if you listen to nothing but Palestrina, or Wagner, or Webern, you might not like this CD. But then you wouldn’t be reading this review in the first place.