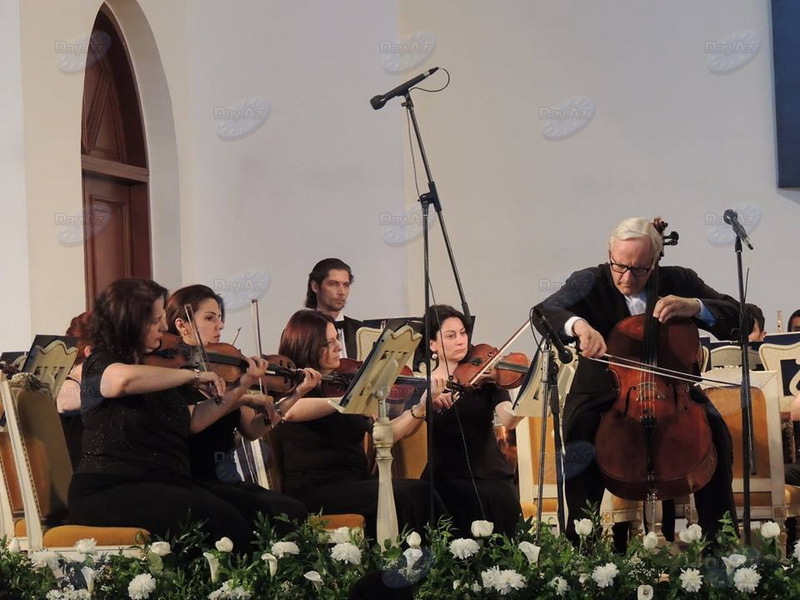 The seventh International Mstislav Rostropovich festival in Baku came to an end on May 18.

The festival was organized jointly by the Heydar Aliyev Foundation, Azerbaijani Ministry of Culture and Tourism, and Mstislav Rostropovich Foundation for Cultural and Humanitarian Programs.

Speaking before the final concert, Olga Rostropovich, the artistic director of the festival and the world-famous musician’s daughter, expressed gratitude to the organizers.

The evening was also marked with the performance of famous Lithuanian cellist David Geringas, who, accompanied by the orchestra, performed Robert Schumann’s „Concerto for Cello and Orchestra in a-moll, op.129“.

The delighted audience did not forget to applaud.

„Usually we come to Baku in winter, but this time, for the first time in seven years, we came in spring. I was amazed by the beauty of your city, which is especially gorgeous this month. I am happy that this year I was able to implement many of my plans for the festival. Finally, I could bring Mstislav Rostropovich Foundation’s scholarship holder to Baku. I’m very proud of them. And I am happy that the festival has taken its rightful place in the cultural life of the Azerbaijani capital, concert schedule of soloists and bands of the world-class, and plans of classical music lovers over the years,“ she stressed.

The festival was attended by world-famous musicians and bands.

The proclaimed musicians presented a profound program, providing an opportunity to hear the works of Mozart, Beethoven, Mendelssohn, Rachmaninov, and many other famous composers once again.

The festival has been traditionally held in December, but it will be annually held in May starting this year.

Held since 2007, the festival brings together famous musicians from different parts of the world.

Mstislav Rostropovich, who was both a cellist and a conductor, was born in Baku in 1927.

In a lifetime of countless memorable performances, Rostropovich gave the premieres of cello concertos by Prokofiev, Shostakovich, Britten, and Bliss. He made his conducting debut in Gorky in 1961, winning outstanding acclaim as a conductor and appearing with most of the world’s leading orchestras.